Posted by sjoperator on Apr 18, 2016 in Sister Jaguar's Blog

I saw where 500 indigenous women came together in Puyo, Ecuador on International Women’s Day (March 9, 2016) to denounce the newly signed oil contract between the Ecuadorian government and the Chinese oil corporation, Andes Petroleum. When I saw the news, I wondered if any of our Achuar friends flew from their villages to Puyo – the town next to Shell where we fly into the Amazon Jungle.

On one of my five trips to the Amazon, Sandra Morse and a few folks from Tucson traveled to north-eastern Ecuador where we experienced first hand the results of the oil industry and its impact on the ecology and culture of the area. The trip was actually publicized to visitors as, “Come Take The Toxic Tour!” And TOXIC it was! 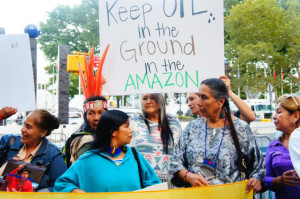 As our canoe approached the village, we were cautioned not to touch the water because the river “burned with acid.” None of the plentiful fish, birds or other animals were seen or heard. Dead trees and bushes lined the river banks. As we walked to the village, destruction and devastation was everywhere. We found the people to be listless, hopeless and without joy. After leaving, it took me three days to recover physically and emotionally from our “Toxic Tour” experience.

Our Achuar friends to the southeast, along the border of Ecuador and Peru, are well aware of the environmental and cultural destruction ahead for them if Andes Petroleum pillages their land and lives. American and Canadian oil companies did not even bother to bid on the land President Rafael Correa put up for auction. They knew the Kichwa, Achuar, Shuar and others would fight to the death to preserve their pristine homeland. It simply wasn’t worth the fight and public relations fallout.
My friends, we must stand with and for our indigenous relatives in defense of Pachamama, Mother Earth,  in Ecuador’s Amazon Jungle.  The health of the entire planet depends on our standing together to fight climate injustice in the area. If we lose this pristine land to oil exploration and extraction, the resulting deforestation, colonization and industrialization will lead to irreversible damage to the delicate balance of Earth’s climate control system as well as the extinction of plant and animal species, the lose of life-saving medicinal plants and the tragic disappearance of indigenous cultures as we know them today. It is time to stand with the indigenous people of the Amazon against eco-injustices related to nature and the environment such as air and water pollution, deforestation, soil loss and climate change. When we stand in solidarity with them, we stand for eco-justice for ourselves and the entire planet. Viva la Pachamama!