The Eagle and The Condor 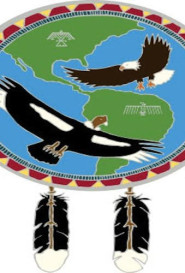 The Eagle and The Condor is an ancient prophecy shared by many indigenous cultures in South America’s Andes and Amazon River Basin that calls all of Earth’s people to mend the “Y in the road” that took us in two conflicting and opposite directions. According to the story, we are at a moment in history when the eagle – representing the mind’s intellect that encourages masculine power and inventiveness and the condor – representing the heart’s wisdom that encourages feminine support and intuition – must come together and unite as one to ensure the continued existence of humankind and our entire planet.

Eagles are predators, hunters, at the top of their game and food chain. Condors are equally large birds but they do not hunt. They don’t need to. They are opportunists; gatherers who salvage life from death as they complete the circle.

The Eagle and The Condor is more than a prophesy. In fact, it has already been lived out in reality. The pre-Columbian Americas were already a post empire world. The Maya, Olmec, Anasazi, and others who formed these ancient yet advanced civilizations were once Eagle-people. Unlike today’s people of the North, however, they had the wisdom to see where they were headed and returned to a more sustainable, equal and enjoyable way of living in communal tribes instead of hierarchical civilizations. They passed this story of The Eagle and The Condor on to future generations so they could remember and learn from their mistakes and experiences.

Five hundred years ago, in the 1490s, the eagle-people became so powerful they almost drove the condor-people out of existence. This is painfully obvious in the conquering of the Americas and the oppressing and killing of the indigenous peoples in the subsequent 500 years – up to and including today.

The prophecy states that during this present 500-year period, beginning in the 1990s, the opportunity will arise for the eagle and the condor to come together, to fly peacefully in the same sky; to create a new level of consciousness for humanity. It is up to us, the people of planet Earth, to make this myth a reality. Pachamama (Mother Earth) has commissioned us as her Pacha-people to create a new, sustainable consciousness for ourselves, our planet and the universe.

The Achuar, the ancient condor-people living in Ecuador’s Amazon rainforest, requested that the modern eagle-people of North American ban together to reinvent the Earth and recommit to its possibilities. In the 1990s, the Achuar began seeing the threat of oil development imposing itself on their ancient, pristine land and life.

The “mind” of the modern world would help the Achuar stand for their land and culture and the “heart” of the indigenous world would help educate and inspire people all over the planet to embrace their spirit of oneness and their sense of enoughness.